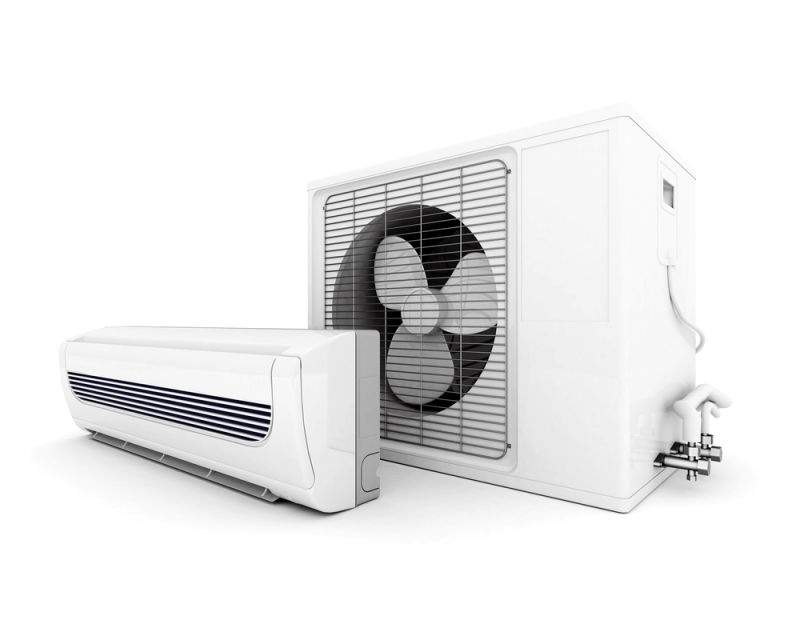 Air conditioning has become an essential part of life in many parts of the world. When humidity and heat combine to make the air dense, sticky, and suffocating, air-conditioned buildings provide a welcome relief. But how does air conditioning work? If you have ever wondered what all the parts of your AC unit are and how they work together, read on for a comprehensive guide to the inner workings of an air conditioner.

The solution to cooling air colder than the ambient temperature is one that was not solved satisfactorily until electricity. With electrical appliances, it is possible to take advantage of chemical reactions in a much more controlled way. This is how air conditioners work.

The very basic explanation for how air conditioning functions is that chemicals in the unit called refrigerants are exposed to heat to become a gas, and then cooled back to a liquid form, and quickly reused to become a gas again. As this happens, the heat is carried from inside the building and released outside, creating a constant siphon of heat energy out of the building. Thus, the air left over in the home, office, or store is cool.

To accomplish this, an air conditioner has three main parts: the evaporator, the compressor, and the condenser.

The evaporator is responsible for pulling heat out of the air and using it to turn the refrigerant into a gas. When a liquid is turned into a gas, this is called boiling. Boiling a liquid takes a lot of energy, usually in the form of heat. As the boiling reaction happens inside the evaporator coils, they suck heat out of the surrounding air, which feels to us like they are emitting cold.

The compressor is outside the building and is used to apply pressure to this gaseous refrigerant. As gasses reach higher pressure, the individual molecules are more likely to hit each other. This action results in the temperature of the gas rising as the energy concentration increases.

Then, the condenser, also outside the building, facilitates the gas condensing back into a liquid. Much like how boiling a liquid into a gas consumes a lot of heat, condensing a gas back into liquid gives off quite a bit of heat. The reason this takes place outside is so that the heat given off goes out into the open air, rather than making its way back into the home.

Once the r 20 solutions refrigerant is in liquid form again, it is ready to reenter the evaporator coils to become a gas and start the process over again. This loop is the basis of air conditioning and is how the air conditioner is able to seem as though it is emitting cold, even though only heat can truly be emitted.

Air conditioners do more than simply cool the air, however. One of the biggest perks of air conditioning in humid climates is the unit’s ability to reduce the amount of moisture in the air. This is a big part of what makes an air-conditioned home or store such a big relief in humid summer months. Humidity impairs the body’s natural defense against heat, which is to sweat liquid which is then evaporated off. Just like an an evaporator, evaporating sweat leeches heat from our bodies to become a gas, leaving us noticeably cooler. When the air already contains too much water, sweat is unable to evaporate, leaving us feeling sticky and much hotter than we would be in a drier climate.

In fact, the original goal that the inventor of the air conditioning unit had in mind was not to reduce temperature at all, but to create a device that would remove humidity from the air. Cooling the air was a pleasant byproduct, but not the main goal of the machine.

The evaporator coils are in fact designed to gather moisture, rather than to cool the air, though the coils in modern air conditioning units do both quite well. When the coils sap heats out of the air by boiling the refrigerant, they also sap moisture by cooling the gaseous water enough to coax it back into liquid form. This is why air conditioning units can often be observed dripping water. Some people believe this is the result of a leak, but in fact the water dripping out of the unit came from the air originally.

The process that causes water to condense out of the air onto the evaporator coils is similar to the process that causes condensation on cold drink cups and cans in hot weather. The difference in temperature causes moisture that comes into contact with a cool surface to release some heat onto that surface in order to turn back into a liquid. When liquid condenses on a wax cup or can or soda, it is not coming from the liquid inside, but rather from the air surrounding it.

The result is that air conditioners pull a lot of moisture out of the air, both by making it too cool to hold much water, and also by leeching the water out directly. This dual process of dehumidifying and cooling the air makes stepping into an air-conditioned building a huge relief on a hot summer day.

Air conditioners take advantage of the power of electricity to do something that was, until recently in human history, a very difficult task. Removing heat from the air requires clever management of refrigerant changing from liquid to gas and back to transport the heat inside of a building to the outside air, allowing the air to be cooled as well as dehumidified.